Rostmann is a culture in After the End. It's part of the Amerodeutsch Culture group.

Rostmann culture encompasses parts of the Rust Belt of old America. Between Peoria and Erie lie the largely Rust Cultist kingdoms. Though their names are often spoonerisms or malapropisms of ancient names the tycoons and machinists are not to be trifled with. There are also some Rostmann families of different faiths, the most prominent being house Steinbach, of Catholic faith.

The lands of the Rust Belt had always been distinct from the rest of the great American Empire. It was heavily influenced by the Kingdom of Quebec's attempts to take over Michigan, ending in the taking of the culturally Rostmann Duchy of Detroit by the Ursulines. There are lands that are Rostmann underneath Motowner elites from the great cities of old like Detroit, Cleveland, and Gary. Religiously the Rostmann have been divided into many groups. While most Rostmann are Rust Cultists, there used to be a large Orientalist population in Detroit, some saying they fled south to the lands of the Suncoast and swamps, while those in Illinois are Catholic, and even still there are Anabaptists in the center of Ohio.

Origin of the name of the Rust Belt[]

Some wise Rostmann men tell of the old days, long before the event, when the land was known as the Steel Belt, and the greatest factories in the world, capable of producing machines with the strength of 200 horses, mechanical bows that shoot faster than the eye can see, and enough of all the wonders in the world to give to everyone. Most of the faithful Rust Cultists believe that the Fathers of the factories, Ford, Carnegie, and Madison spread the magical works around, to every single man and woman until they themselves got too used to lavish living that they forgot how to create the machines themselves, and so the factories rusted around them until they had nothing left.

The Rostmann culture has the Shieldwall cultural retinue. It has 400 pikemen, and combat bonuses of Pikemen Morale +20%, Pikemen Attack +20%, and Pikemen Defense +40%. It costs 1000 retinue cap usage, monthly maintenance of 0.25, and a creation cost of 140. 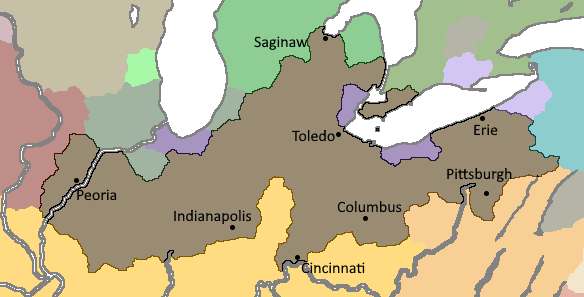