Patria Grande is a religion in After the End. Followers of the Patria Grande faith worship Gran Colombia, and its founders: Simón Bolivar, Francisco Santander and Manuela Sáenz; often mixing them with catholic saints. Aditionally, they worship the abrahamic god, known to them as El Divino Niño, or "The Divine Child" in english.

"The term Patria Grande, or Great Fatherland, is to its followers both a political ideal and a divine mandate. The adherents of the faith worship the heroes of the past who liberated and ruled the original Patria Grande, bringing what they consider a golden age. As a result the faithful aspire to see the legendary homeland unified once more. Their pantheon is made up of "Próceres", deities originating from the syncretism between the founders of Gran Colombia and several Catholic saints." ― In-game description of Patria Grande 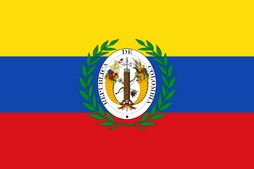 Patria Grande seems to have been spread mostly by Zacarias Alvarado the first, the Falso Libertador. He conquered the kingdom of Cundiboyacá first, likely from his home in Bogotá, from its pagan ruler Ollantay Yupanqui. He then formed the kingdoms of Antioquia, El Caribe, and Puente Grande. He Probably subjugated Zulia and placed the Epiayú dynasty on the throne before attacking Venezuela, and being burnt at the stake. His family's lands slowly dwindled over the next century until now in 2666 where his family only owns Bogotá itself, and the marquisate of Chiriqui.

All holy sites with the exception of Caracas are held by Patria Grande rulers, with Bogotá being held by the Caudillo himself.

Patria Grande rulers have the decision of Holding