Lacustrine is a Culture in After the End. It's part of the Laurentian Culture group. It is based on the modern rural culture of Michigan's Northern lower peninsula & thumb region.

When travelling North and West from the Rostmann lands near Detroit one will find themselves in Lacustrine country. The “inter-lake” population is a mix of Evangelical, Norse, and Rust Cultist faiths, but their overall culture lies closer to the feudal realms in Chicago and Ontario. 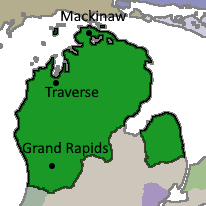