After the End Fanfork Wiki
Register
Don't have an account?
Sign In
Advertisement
in: Christian faiths, Religions

Catholicism is one of the faiths practiced in After the End. It is the largest faith in the game, and is headed by the Pope, who as of 2666 resides on St. Louis, the New Rome. The core beliefs of Catholicism are found in the Nicene Creed. The Catholic Church teaches that it is the one, holy, catholic and apostolic church founded by Jesus Christ in his Great Commission, that its bishops are the successors of Christ's apostles, and that the pope is the successor to Saint Peter, upon whom primacy was conferred by Jesus Christ. It maintains that it practices the original Christian faith taught by the apostles, preserving the faith infallibly through scripture and sacred tradition as authentically interpreted through the magisterium of the church. The Latin Church, the twenty-three Eastern Catholic Churches, and institutes such as mendicant orders, enclosed monastic orders and third orders reflect a variety of theological and spiritual emphases in the church.

Of its seven sacraments, the Eucharist is the principal one, celebrated liturgically in the Mass. The church teaches that through consecration by a priest, the sacrificial bread and wine become the body and blood of Christ. The Virgin Mary is venerated as the Perpetual Virgin, Mother of God, and Queen of Heaven; she is honoured in dogmas and devotions. Catholic social teaching emphasises voluntary support for the sick, the poor, and the afflicted through the corporal and spiritual works of mercy. Catholic is part of the Christian religious group.

"Catholicism is one of the oldest branches of Christianity, and it survived the cataclysmic events of centuries past by the skin of its teeth. After the Deluge, the surviving Catholic hierarchy in America received word of a divine apparition that confirmed the destruction of the Papacy in Rome and gave the surviving American cardinals the right to elect a new Bishop of Rome from their number. The new American Popes lacked a permanent temporal seat for centuries - a period known as "the Wandering Papacy" - until control over the old city of St. Louis in Missouri was finally established in the late 24th century. Because of its association with the Papacy, St. Louis earned the nickname "New Rome", although this term is not officially used by the Catholic Church. The formal head of the religion is the Bishop of Rome - the Pope." ― In-game description of Catholic

According to legend and prophecy, Petrus Romanus, the last pope in Rome, would cause the destruction of the Eternal City. When the Event occurred, all forms of advanced communication were lost. Subsequently, this meant that Catholics in America had lost contact with the Holy See in Rome. The Prophecy of the Popes was considered to have come true. Due to the need for a Catholic head of faith, the leading Catholic bishops of the Americas elected their own Pope in the city of St. Louis. St. Louis was promptly rechristened into 'New Rome' and the new Pope who resided there took over responsibility as the Catholic head of faith. In the face of post-Event upheavals, most Catholics readily recognized the new Pope's power. However, not everything was so harmonious. One group of Catholics, the Sedevacantists, refused to recognize the authority of the Pope in New Rome and continued to view the Papacy as being vacant due to lost contact with Old Rome. Another group, the Neo-Gnostics, emerged in Colorado as a fusion of Catholic and Californian Cetic teachings and refused to respect the Pope's authority as religious head. Finally, the Catholics of Quebec also refused to recognize the authority of the Pope in New Rome and instead turned to the local matriarchal Ursuline Order for religious guidance. The only time the Ursulines of Quebec were united with mainstream Catholicism was during the Papacy of the Ursuline Pope and Abbess-General Agrippine 'the Maid' the first (and so far only) female Pope.

The Papacy itself had only been a titular title until 2400, with each respective Pope ruling from his own home city. However, when the Canon of Saint Louis left the Ecumenical Council and elected Pope, he turned the city into a New Rome, and made it the official seat of the Papacy.

Catholicism is now spread across the Midwest, from Chicago to Houston, with a few exclaves spread around. 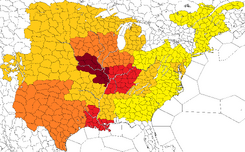 As of 2666, Catholicism has a 54.9 moral authority. A temple holder of the Catholic faith is called a bishop.

Vassals of a Lord of Different Faith[]